Hey there, it’s been a while. I’m still here and I’ve been meaning to sit down and write this post for weeks! Read on to see what I’m into right now.

Currently I’m reading Me Before You, for book club. It’s not the type of book I tend to go for (hardcore memoir fan here), but I’m enjoying it. I just read the most heartbreakingly beautiful, raw essay from Lena Dunham about her decision to have a hysterectomy at 31.

We just finished Netflix’s Salt Fat Acid Heat, and were left mesmerized, hungry, and filled with intense wanderlust (that Italy episode though)! Each episode is devised around one of the four central components of cooking, and takes place in a different country. Samin Nosrat is so knowledgable but humble and endearing, and I feel like this show’s taught me so much and left me so inspired.

I just finished the 4th and final season of Catastrophe and the last episode gave me heart palpitations but I found it captured its essence perfectly. I found it to be really thoughtful, metaphorical, and a fitting way to end the series, as stressful as it was (just watch it and you’ll understand what I mean).

I was in New York City a couple of months ago with my mom and was fortunate to catch both To Kill a Mockingbird and True West on Broadway. I enjoyed Mockingbird, and thought Jeff Daniels and Celia Keenan-Bolger delivered a stellar performances as Atticus and Scout Finch (as did most of the rest of the cast), but it failed to draw me in or pull at my heartstrings the way the book or film did (and I love Aaron Sorkin, who adapted it). The dark horse of the weekend was True West, which is some of the best theatre I’ve ever seen.

The Sam Shepard play is about the intense rivalry of two envious brothers, going toe to toe to achieve success, all the while driving each other (and themselves) absolutely crazy along the way. I hadn’t read this play and admit I initially was more driven to see it based on my undying love for Ethan Hawke and Paul Dano, but it’s a hell of a play. These guys were forces of nature, tackling their respective roles with comical ferocity and great chemistry. It was still in previews when we saw it and it felt like such a treat to witness their talent and see them making new discoveries throughout the show.

For music, I’ve been listening to a lot of James Vincent McMorrow (his voice slays me!) and Maggie Rogers. I’ve had a lot of random songs on repeat, rather than an entire album. A few songs I’ve been obsessed with lately are: “Georgia,” by Emily King, “Musta Been Something,” by Lake Street Dive, “Love Songs for Robots,” by Patrick Watson.

As for podcasts, I was cooped up all day yesterday in bed with the crud, and completely binged all six episodes of The Dropout. It’s about the bizarre downfall of the world’s youngest billionaire, Stanford dropout Elizabeth Holmes, and her healthcare startup Theranos, after it was discovered the whole company was a sham. I find the whole story fascinating and I’m in so deep now I’m devouring every article I can find, while wondering how quickly I can read the next two books for book club so I can start reading Bad Blood and then watch HBO’s new documentary, The Inventor. Whew! This is one rabbit hole you definitely want to go down.

This quiche recipe from Tartine Bakery. Best quiche I’ve ever had. Also, never buying creme fraiche again now that I know how easy it is to make!

This lipstick, which I picked up at Credo Beauty in NY, is the perfect shade of red for me because I feel like I can commit to it and wear it fully, without looking garish or like a dancer in a Robert Palmer video.

This brass starburst bracelet from Michelle Starbuck Designs. She’s a Chicago-based jewelry designer and I love her work! I also have these laurel studs that I’m equally obsessed with.

This magazine cover (and AOC)!

That’s all she wrote – happy Friday! 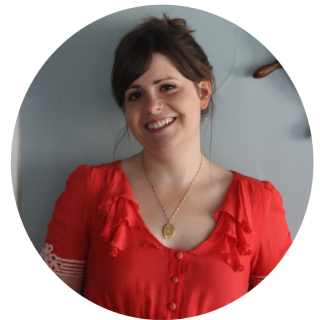